So it turns out that the doctor thought we had a bili-blanket for some reason, and that is why they were going to have us wait until tomorrow to do another blood draw. When I called to correct them they had us bring poor little Henry into the office this morning to test his bilirubin levels again. So much for a day without a doctor visit, I guess!

Anyway, we just got the results back, and his levels have dropped again! He was at 13.2 yesterday and now he is at 10.9. And that is without a bili-blanket and basically without sunlight (it has been foggy/rainy the past few days). What that means is that Henry doesn’t have to go to the doctor until his regular two week checkup next week! Hooray!

In other news, Geoff went back to the office from about 9-3:00 today, which meant I had little Henry all to myself. I was pretty nervous for Geoff to leave, since he has been such a huge help with everything, but I’d say everything went pretty smoothly considering. Not that I’m ready for him to head back to the office full-time yet, but at least I know I can do it when the time comes.

Thanks for all the love, support and well wishes over the past week. It is very much appreciated!

Happy (belated) Father’s Day to all those dads and daddies-to-be out there! I hope you had a wonderful day!

Geoff and I started the day by sleeping in (which never happens) and watching some TV on the couch, then headed over to his parents’ house for a BBQ and leftovers from Brittany’s bridal shower (more on that later). It was so nice to be able to relax outside on one of the first hot summer days of the year. We got Geoff’s dad a two-sided sign that says, “Grandpa’s Workshop” from Etsy. For Geoff’s first Father’s Day I got him an “I love Daddy” onesie, a Gryffindor onesie straight from The Wizarding World of Harry Potter, and a Green Bay Packers hat (also from Etsy). Did you get/give any cool gifts for Father’s Day? 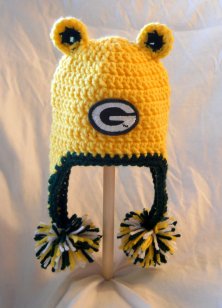 We did not get a chance to see my dad this weekend since they live in another state, but we are planning a trip there in two weeks, so I’ll tell you what we bought him then (don’t want to spoil the surprise by having his read about it on here).

After the BBQ we headed down to the beach for our volleyball games. Unfortunately I’m not allowed to play anymore (doctor’s orders) but it was such a nice day to be by the lake and it is really fun to watch everyone play.

We also lucked out and got some beautiful weather for my sister-in-law’s bridal shower this weekend. I helped throw the shower, which involved planning out games, cooking 30 or so of the delicious flatbreads I mentioned a few weeks ago. Everything went extremely well, the food was delicious and everyone seemed to have a great time. 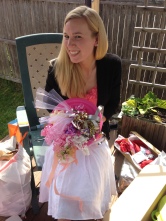 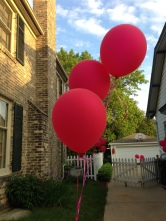 I wasn’t the only pregnant person at the shower since two of Brittany’s cousins are preggo too. They are a bit further along than me, and they each already have one kid, but the good thing is that I get to hear their advice (and I get their maternity hand-me-downs!). Since my bump “popped” out over the weekend, I think it is officially time to go shopping for maternity wear. I don’t need much at this point, but a pair of jeans and a dress would be awesome. I think I’ll probably head to the outlets this weekend. I’ll let you know if I find anything good!

In other news, we had another doctor appointment this morning, and everything is still going great! We got to hear the baby’s heartbeat again, thought this time (s)he was hiding way on the left side of my belly and I started to get nervous again when the doctor couldn’t find the heartbeat right away. Our next appointment is our ultrasound to determine gender, which is exactly one month from today!! Don’t forget to get your guesses in on if it will be a boy or a girl (see sidebar) before the big reveal.

Last thing – have any of you heard of this “Pregnancy Belt” thing? It is a way that dads can feel what is happening when the baby kicks – in real time! This would be so fun to try out with Geoff once I start feeling the baby’s movements. There is a video that accompanies the story, so check it out if you have time – it is adorable how the dads react.